Meatlinc have been asked to participate in the The RamCompare project, established by Signet.    It is a two-year pilot project designed to trial strategies for capturing commercial data on slaughter lambs in the UK sheep industry.

67 rams from five breeds – Texel, Suffolk, Charollais, Hampshire Down and Meatlinc – will be tested across these flocks over the 2016 and 2017 lambing seasons.

The rams will be representative of the top 20 per cent of their breed based on their estimated breeding values (EBVs) and the AI sires will have good linkage with other pedigree flocks.

Data from their lambs will be collected through to slaughter. This data will be evaluated to see whether its inclusion in the rams’ genetic evaluations identifies differences between sires and improves their accuracy. A ranking of the tested rams, based on commercially important traits, will be generated at the end of the project in 2017. 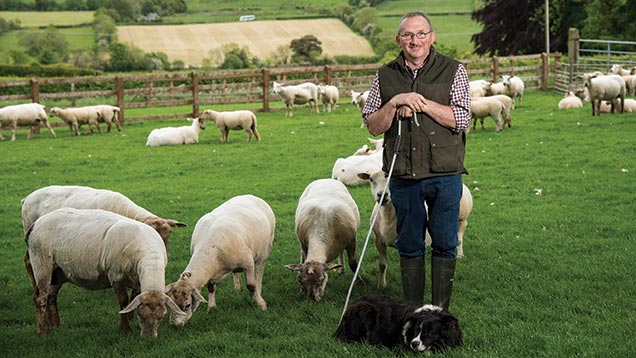 Meatlinc customer, Isaac Crilly from Castle Derg, County Tyrone has been selected as a finalist in the Farmers Weekly, Sheep Farmer of the Year 2015.   Isaac started using the Meatlinc terminal sire several years ago, which gave the conformation and shape he knew retailers were looking for. His lambing percentage is now up to 200%, with all ewes lambed unaided.  http://www.fwi.co.uk/livestock/farmers-weekly-awards-2015-sheep-farmer-of-the-year-finalists-revealed.htm 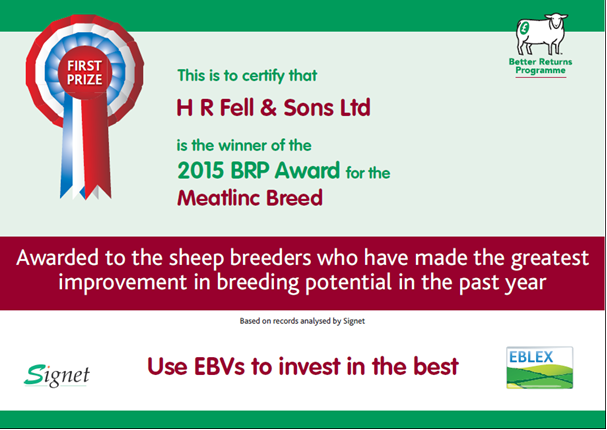 The Thorganby flock, owned by George Fell of Thorganby, York has been recognised for the fourth time by EBLEX as the Most Improved Flock of Meatlinc sheep in England for 2015.

The award is presented by the EBLEX Better Returns Programme (BRP) to the recorded flock that shows the greatest genetic gain for commercial characteristics over a 12-month period. There is a separate award for each of ten UK breeds.

The Meatlinc breed, established by George’s grandfather in the 1960’s, was developed with the genetics from five different breeds with the intention to develop a commercial ram capable of serving at least 80 ewes a season, working for five years on a strictly commercial basis.

George is one of five franchised breeders in the UK and runs 450 recorded ewes. All Meatlinc breeders record the performance of their progeny religiously, using Estimated Breeding Values (EBVs) for growth rate and carcase traits in their breeding decisions. Top shearling rams are offered as reference sires to the other breeders after proving themselves as ram lambs in their home flocks.

The Thorganby flock has made rapid genetic progress due to a selection process based on figures and the relatively young age of the flock. Ewes are sold after four seasons, having been superseded by the genetics of the ewe lamb replacements coming into the flock. In 2007 the flock index averaged 231, the flock average has since increased by over 100 points.

The breed has continued to place increasing focus on the use of Computed Tomography (CT) to assess the total amount of muscle in the carcase, with the view that all stock rams should be CT scanned. Genetic gains for the whole of the breed are showing the impact of this policy.

.“The additional CT scanning allows us to make even more informed breeding decisions, identifying elite rams for traits like muscle yield and gigot shape, as well as providing information about killing out percentage and muscle area across the loin,” says George.

“CT scanning all potential stock rams increases the rate of genetic gain achieved in Meatlinc flocks, increasing the accuracy of our EBVs and providing confidence that breeding stock will breed true. As a group, our breeding goals are always changing slightly."

“The breed has always been renowned for its fast lamb growth rates – but we are challenging ourselves to increase the depth of muscling across the loin, particularly given the high value of the loin within the carcase. This has led to some of the most rapid genetic gain seen in any of the terminal sire breeds.”

All franchise breeders take the recording of their flocks very seriously, performance testing lambs under strict commercial management.  They have seen Scan Weight EBVs increase by over 500g/year over the last decade as the breed sought to enhance lamb growth rates. This is paying dividends to commercial producers.

Meatlinc investment in research and innovation

Over the last four years George has been involved in a gene fishing project which aims to provide a genetically improved terminal sire demonstration to see if further genetic progress can be achieved in a new strain of Meatlinc by exploiting genetic variance in other breeds.

Again CT technology has been used to accurately evaluate growth, muscling and meat quality traits in first and second crosses between Meatlinc ewes and elite terminal sires from other breeds.

The project aims to identify carriers of valuable genetic material that might be useful to the breeding programme in the future, therefore enriching the Meatlinc gene pool.

The collection and analysis of this data is still at a relatively early stage and was not part of the reason for George’s flock wining this award, but the availability of these genetics bodes well for the future of the breed.

George says: “This research highlights the importance of the Meatlinc within the industry and places us in an exciting position to compete with other breeds in the Combined Breed Analysis (CBA)”.

The CBA is an EBLEX funded project which looks to incorporate performance data from different terminal sire breeds into a single, multi-breed genetic analysis over the next couple of years.

The Meatlinc breed has also agreed to supply rams and semen into the first stage of a recently launched commercial progeny test RamCompare.

RamCompare will use Meatlinc rams as one of five terminal sire breeds chosen to be involved in this pilot project to produce progeny on commercial farms over the next two years. Progeny performance will be monitored and analysed from birth to abattoir.

George is very excited to be involved in both projects and has pledged total support from all Meatlinc breeders. Through the use of Artificial Insemination and Single Sire Natural Mating groups eight different Meatlinc rams will be put on “test” over the next two years, including the country’s top Meatlinc ram and future Meatlinc reference sire.

“As Meatlinc breeders are currently performance testing lambs under strictly commercial conditions it will be interesting to see how Meatlinc genetics will perform on the RamCompare flocks,” said George.

Commenting on the win, Signet Breeding Services Manager Sam Boon said: “Rates of genetic improvement in Signet recorded flocks are at an all-time high. The difference between the best high EBV breeding stock and average animals is increasing year on year.

“One of the major benefits of improving the genetics within a flock is the cumulative and permanent way it can lift performance,” says EBLEX sheep breeding specialist Samuel Boon. “The time and effort involved will pay dividends for years – not just in the winning flock, but also in the flocks that buy George’s rams. The improvement in the genetic merit of the Fell’s flock is clear and they are to be congratulated on their achievement.”

“By using the latest technology such as CT scanning, Meatlinc breeders continue to develop a commercially attractive breed – one that grows fast and produces a high quality carcase under low cost conditions.”

At a time when opportunities for young men and women in agriculture are high on the agenda, George Fell who farms with his father at Thorganby, in the Vale of York, has had the chance and wants to encourage others to follow him.

With two recent retirements from the network, George is now looking for new breeders. “This is a great opportunity for someone who is interested in producing commercially reared animals to a high standard using all the advances of modern genetics” says George. “It could suit a young person like me, whose father is not yet ready to retire but is willing for his son or daughter to set up a separate enterprise on the farm”. “We are not interested in producing pampered animals for show rings – we want to use the great tools that modern genetics can offer, and coupled with good stockmanship produce rams that will go out and work and produce lambs to fit the exacting specifications demanded today.”

New breeders buy into a package of pedigree Meatlinc ewes plus young stock rams, at a very reasonable price, undertake to fully record through Signet’s Sheepbreeder scheme, participate in strategy meetings where members decide the way forward and set ram prices, and attend selection days where stock rams are approved and reference sires selected to give connectivity throughout all flocks. “It’s like a big family” says George. “We all get on well, we work together to promote the breed, and we are all passionate about the genetic gains that come from informed selection”. 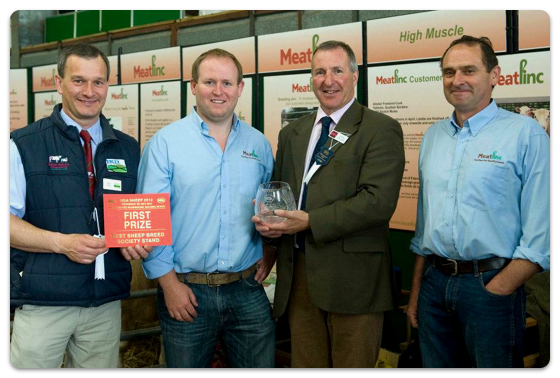